It’s Thanksgiving week in America and if the pilgrims had celebrated with prime rib instead of turkey, it would be my definitive favorite holiday. Alas, I still love the idea of pausing life to be grateful even if it means eating turkey.

A mentor of mine was recently talking about business relationships, and said “I may have made some decisions that looked dumb to outsiders, but my bent towards generosity has never once disappointed me.”

I love that idea. When you say the word generosity, people usually think of things like donating to a charity. But there’s another aspect of generosity that is rarely discussed but just as powerful. It’s relational generosity, or generosity of influence.

Andy Stanley talks about the leadership principle of generously leveraging your influence on behalf of other people which reminds me of this:

“At critical moments in time, you can raise the aspirations of other people significantly”

I know that people can create an inflection point in someone else’s career with generosity because I’ve experienced it again and again. When I was young and dumb and clueless (so like, yesterday), people invested in me with their time and wisdom. And people connected me with other people. And all of those people, bit by bit, completely expanded my view of the world and the possible.

People have shown me Ridiculous Generosity.

My hypothesis is that it’s rooted in abundance mentality.

Folks with a scarcity mindset perceive that if you win, then they lose…so of course they don’t help anyone else. But those with an abundance mentality perceive that not only is there room for everyone to win, there is room to grow the pie so that everyone wins bigger.

Ridiculous generosity is the other side of the ‘play long term games with long term people’ coin.

Playing long term games with long term people means putting an abundance mentality to work even when a scarcity mentality tries to creep in. It means helping people today whether the pay off is in 15 minutes, 15 years, or the pay off never happens. 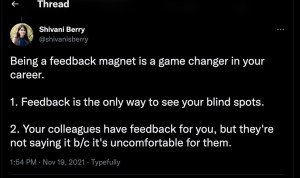 Have I mentioned this is still aspirational for me and I don’t say this as someone who has this nailed? This is #goals.

Ridiculous Generosity isn’t necessarily about the big business decisions or the decisions that cost real dollars, time, political capital, or reputation risk. Though it could bleed into those through a relentless focus on long term win-wins.

The real power of Ridiculous Generosity is in the daily interactions that cost little to nothing besides bending towards generosity.

You might be thinking this is all fine and well, but we each have finite time and finite focus. I’d 100% agree. Even if we wanted to help everyone, we can’t….the time math doesn’t work. So Ridiculous Generosity *has* to have boundaries around it. The two big ones for me are:

(1) Not everyone receives Ridiculous Generosity. It’s kinda like qualifying sales leads, only in this case it’s qualifying people asking for a favor. Maybe you only show Ridiculous Generosity to people you already have a relationship with, or only to people who’ve shown that they are serious minded, or only to the cold outreacher who put in the effort with a thoughtful ask that shows they’ve done their homework. Maybe when the random person reaches out asking for a call to talk about x, you ask them to first email the specific questions they’d like to discuss. (Funny thing, this is where a lot of requests suddenly go silent because the person wasn’t serious about it so the qualifying filter paid off.)

(2) Ridiculous Generosity has time boundaries. There are times when you can barely squeeze another email into the day, let another phone call or coffee date. And that’s ok. If it’s someone you want to help and you don’t have the mental or emotional or calendar capacity right now? Tell them to check back in some specific time frame. If it’s someone that you really don’t want to help? Tell them that. Well, soften it and say it kindly but yeah, let them know this is not something you will be helping on. Even when we can't be as generous as we'd like, we can always be polite.

This actually reminds me of when we talked about the idea of discernment and that knowing WHEN to do something can be higher impact than knowing WHAT to do.

If I were to rewrite the Ecclesiastes framework for people building & creating, it would look something like this… There is a right time for everything.

A time to expand optionality and a time to hyper commit.

A time to ignore to the skeptics and a time to listen carefully.

A time to meticulously plan and a time to just👏🏽get👏🏽started👏🏽.

A time to generously schedule intro calls and a time to ruthlessly guard your calendar.

A time to talk to every single sales leads and a time to relentlessly qualify leads.

A time to burn the ships and a time to hedge your bet.

Lastly, make it easy for people to help you.

(Most) people like to help people. And we all like to help people who help us. I find it interesting that generosity is a bit of a currency in both the startup world and in the ag world, maybe there’s a correlation between people doing hard things and an embracing of generosity?

Get the first 50 editions of Prime Future in 1 ebook:

Prime Future 56: A right time for everything, the builder’s version

Prime Future 70: Why I’m wary of too much certainty 🙅🏻‍♀️

“Buy land. They aren’t making any more of it.”

It seems like every farm kid across the entire face of God’s green earth grew up hearing some variation on this idea. Farmland has historically appreciated ~12% annually.

While farmland has been a reliable investment class over time, many would say that’s true of the broader real estate market.

If you’ve never felt older than after reading that tweet, you are not alone.

What non-physical things are ‘young crypto investors’ investing in? The obvious is cryptocurrencies, but there are also DAOs (which we’ve briefly touched on) and NFTs.

“A non-fungible token (NFT) is a non-interchangeable unit of data stored on a blockchain, a form of digital ledger, that can…

Technology only has a fighting chance in agriculture when it definitively improves producer outcomes🤑 and/or consumer outcomes😃. Tech for the sake of tech is a road to nowhere.

Moreover, I get reeally skeptical when seemingly overnight cult-like obsessions form, as has happened in the second half of 2021 in the tech world with DAOs.

Unpopular opinion: DAOs are just blockchains all dressed up & looking for something to do on a Friday night.

Constitution DAO is probably the most public example, recently formed to purchase a copy of the US Constitution that was going up for auction. The group raised ~$40M which wasn’t quite enough to snag the prize, so the DAO was dissolved.

One definition of a DAO is, “a group organized around a mission that coordinates through a shared set of rules enforced on a blockchain.” Hmmm. Here’s another perspective:

Prime Future 57: The packers get Standard Oil’d. Then what?

A D2C Revolution Is On Its Way

Prime Future 131: Why haven’t other proteins been Eggland’s Best-ed?