Facebook recently announced the company is changing its name to Meta, a head nod to their bet on the ‘metaverse’. The Internet had a lot of jokes about it, including: 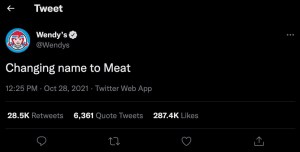 But jokes aside, if the 7th most valuable company in the world (~$943B) is changing their name to bet on a single idea, then that idea is probably worth being aware of. Whether they are correct or not is an entirely different discussion. (Some say it’s a PR stunt to distract from the bad press Facebook has received lately, but I don’t think you change the corporation’s name and stock ticker symbol just to change the news cycle…Meta believes the metaverse will be a big thing.)

The metaverse may seem like a topic outside Prime Future scope. I like to dig into trends happening in livestock & meat & milk production but this is not even clearly a thing, let alone one impacting the animal protein world. And yet…

There is a general trajectory in tech that new tech usually hits consumer use first, then trickles to B2B uses over time. What’s happening today in the consumer world can give clues about what’s coming to the B2B world in say, 3-10 years.

And the world of gaming is often the ‘canary in the coal mine’ for consumer facing tech. What’s happening today in gaming can give clues about what’s coming to the consumer world of tech in say, 3-10 years. And many in the gaming world argue that the metaverse, or some early variation of it, is here.

So while on the one hand I could not care less what’s happening in gaming (my idea of gaming is re-reading the Ron Chernow biography on Alexander Hamilton), it does kinda give some clues about what tech is headed to the broader consumer world and then to the B2B world. And tech trends for the B2B world puts us squarely in the domain of what matters in livestock, meat, & milk value chains…so here we are.

What is the metaverse? 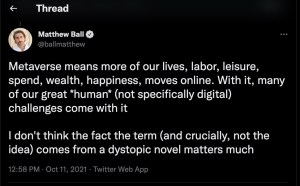 Meta builds technologies that help people connect, find communities, and grow businesses. When Facebook launched in 2004, it changed the way people connect. Apps like Messenger, Instagram and WhatsApp further empowered billions around the world. Now, Meta is moving beyond 2D screens toward immersive experiences like augmented and virtual reality to help build the next evolution in social technology.

Notice the word immersive. Immersion into the digital world is a pillar of the metaverse.

This is an oversimplifying, but the metaverse is largely about new ways to do what we already do online. Which is to say, the metaverse will provide more digitally immersive ways to connect and socialize and work. Perhaps with new tools (like VR glasses), for sure with better graphical interfaces, likely with new digital infrastructure to facilitate it all. But generally, the idea of the metaverse seems more evolutionary than revolutionary, at least from a user perspective.

(Scroll down to skip to the ‘so what’)

“To understand why (decentralization matters), it’s useful to think about the Metaverse as a virtual version of the real world, a place in which people work, play, shop, and socialize as avatar versions of themselves, or many, depending on the context. Just like we buy outfits for our physical bodies and just like gamers buy skins in Fortnite, everyone will buy outfits for their avatars. Just like people want to buy nice homes and decorate them to reflect their personal taste, we’ll buy and decorate virtual spaces. And on and on.  We will spend real time and real money in virtual worlds.

If the Metaverse operated like the internet does today, though, we wouldn’t actually own any of those things. They’d be tied to whichever platform we bought or earned them in. Platform changes its mind, lose the items or see their value deflated. Leave the platform, lose the items.”

How do you allow people to maintain ownership of digital assets as they move through the metaverse? Decentralized ownership of the platforms is part of the answer, but also this is where cryptocurrency enters the metaverse conversation – but that’s for another day. The Journal said this:

For the metaverse to take off, we’ll need upgrades to existing computer systems and technology, tech executives say, including more raw computing power and higher-quality graphics as well as a universal framework that allows users to move seamlessly from one part of the metaverse to another. Also essential will be programming tools simple enough to allow anyone to create their own virtual realms and experiences, not just skilled developers.

Consider that many of us have just spent 18 months on 3+ hours of video calls every day. Zoom is great, but also, doesn’t there have to be a better way than ‘virtual coffees’? The metaverse just might unlock that…or at least try to do so.

Back to the idea of gaming as the canary in the coal mine for new tech, there are already some big companies working solely in this space of immersive digital experiences. Ask the 16-20 year old in your life about the company Discord, which started as a place for gamers to find each other and chat but morphed into being for “anyone who could use a place to talk with their friends and communities.” That includes companies using Discord for non-Zoom, more digitally immersed team meetings. Oh and Discord has 250m+ users and is supposedly generating several hundred million dollars in revenue – it’s a real thing (some) people use today, not just the idea of a future thing.

Ok with all of that background, the real question will be, how and when and WHY will people use the metaverse? It’s hard to say because it’s early innings still, maybe the game hasn’t even started. 🤷🏻‍♀️

If consumers get comfortable with the metaverse, what will that mean for consumer expectations?

…of how they buy meat & milk? What will consumers expect from the buying experience, but also the products themselves?

Think about this generationally. Millenials are the first digitally native generation – we learned to type in kindergarten and had social media accounts in high school. We grew up with SimFarm and Oregon Trail and that weird ski game where the bear ran out to eat the skier. Millenials grew up way more immersed in the digital world than Gen X’ers, and so there’s always been a different set of expectations about the world, that there should be an online element for all things.

Gen Z’ers though, they make Millenials look like we’re back here using a rotary phone. Their expectations about digital experiences are vastly higher. They experience life with their peers via Snapchat and TikTok. They are way more immersed than Millenials, so have different expectations. And so on and so on.

As technology changes, our experience changes, and our expectations.

Imagine if Starbucks or Chick Fil A didn’t have a website in 2011, or a mobile app in 2021. If the metaverse becomes a thing, then let’s assume that in 2031 brands will have to have a metaverse presence.

Expect to see the tech forward food brands & retailers at the bleeding edge of this trend.

How will the metaverse impact input companies, and meat & milk processors?

I don’t really know but I think it largely centers around how people work. Just as consumer expectations for brands evolves, people’s expectations for workplaces evolve to continue expecting more/better digital tools. So…

The first metaverse native generation will have expectations about how work works in the metaverse.

Because oh by the way….

“Last week, Facebook rebranded to Meta, and outlined its vision for the budding metaverse. This week, Microsoft announced its own entry into the metaverse — and its early vision sounds a lot like Meta’s. Both companies are all-in on:

(3) Virtual workspaces: Both companies revealed virtual whiteboards and other collaborative settings that position the metaverse as a place to get work done

Each company has distinct advantages to fulfilling its metaverse dreams.”

So maybe the metaverse will simultaneously find a fit with consumer and business use cases early on?

For livestock producers, there could be opportunity in the contrast.

Perhaps as more of life becomes more digital, it has the potential to make the physical world more engaging as a contrast. Why do people like to go to pumpkin patches in the fall and Christmas tree farms in December? (besides the Insta worthy pics, obviously) It’s because there’s something appealing in the contrast with being on a computer all week, even in today’s version of the digital world. And if that is an accurate hypothesis, then a further dive into the digital world with the metaverse will mean a stronger contrast between the digital and the physical world. How will farmers capitalize on that? Will we see more ‘Fair Oaks Farms’ equivalents? (If you don’t know Fair Oaks, it’s like livestock Disneyland. Agritourism is way too lame of a word to describe what they flawlessly execute.)

And in that same vein, could the metaverse somehow be a catalyst for more farmer D2C sales? Like Barn2Door but in the metaverse??

If the metaverse materializes, what will *not* change?

Engaging with brands, buying decisions, ordering, etc may all happen digitally – maybe even in the metaverse eventually – but you know what can never be digital? Food consumption and food production.

The Journal also said this:

Concerns over privacy and security will need to be addressed as well. And then there’s the matter of the metaverse’s potential pitfalls, including the possibility that people will find the virtual realm so compelling that they neglect their real-world needs.

“There’s a potential to preferring it to traditional life,” Rachel Kowert, an Ontario, Canada-based psychologist who has studied the mental health of gamers, says of the metaverse, adding that the risks are higher for children. “Their primary learning about how to behave and engage with the world is through their peers and social interaction,” she says. “It’s a critical component of how we learn to be people.”

…but, doesn’t that sound like what people have been saying for 10 years about social media?? There is nothing new under the sun.

The question for the animal protein industry will be:

How do you continue bridging the physical & digital worlds to be relevant in both by meeting customers where they are?

What a time to be alive!

Get the first 50 editions of Prime Future in 1 ebook

Prime Future 75: Nobody knows how the future of work will work.

Prime Future 83: Just a heart transplant, or a catalyst?

Technology only has a fighting chance in agriculture when it definitively improves producer outcomes🤑 and/or consumer outcomes😃. Tech for the sake of tech is a road to nowhere.

Moreover, I get reeally skeptical when seemingly overnight cult-like obsessions form, as has happened in the second half of 2021 in the tech world with DAOs.

Unpopular opinion: DAOs are just blockchains all dressed up & looking for something to do on a Friday night.

Constitution DAO is probably the most public example, recently formed to purchase a copy of the US Constitution that was going up for auction. The group raised ~$40M which wasn’t quite enough to snag the prize, so the DAO was dissolved.

One definition of a DAO is, “a group organized around a mission that coordinates through a shared set of rules enforced on a blockchain.” Hmmm. Here’s another perspective:

Prime Future 57: The packers get Standard Oil’d. Then what?

A D2C Revolution Is On Its Way

Prime Future 90: The outset of a new era for meat packers & food retailers?